Home » Blogs » Halloween Skull Trophies and History of the Season

In late October, when all the ghosts and ghouls come out, people start swinging by our trophy shop to get their costume contest and horror movie trophies all in order. We have a variety of trophy toppers in the store to make Halloween trophies, but it’s always fun when people bring in an idea for a custom trophy. This past year, a man brought in a creepy skull mounted on a wooden board that we added a metal plate to. We used a horror movie font to really complement the rest of the award. 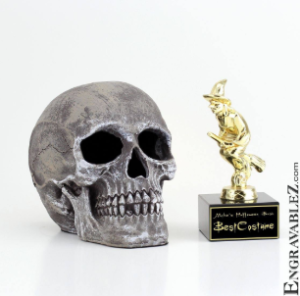 One of the custom Halloween trophies we’ve made

So many people dress up and hand out candy for Halloween, but have you ever wondered when that all started? Halloween celebrations trace back to an ancient Celtic festival called Samhain. The festival signified the end of the Summer harvest and the beginning of Winter, which was associated with death at the time. It was believed that the world of the dead merged with the world of the living on October 31st, and that was how they explained crops dying. They also felt like the worlds being merged allowed the druids to make more accurate predictions of the future which was a very important source of hope and comfort for the Celtic people. They sacrificed crops and animals to a bonfire on Halloween in hopes of minimizing damage from the traveling spirits. Part of the festivities included wearing animal skins and heads as costumes and telling each other’s fortunes. Samhain ended with people relighting their hearth fires with flames from the bonfire which they believed would protect them through the winter.

Over time, this adapted to fit each culture and by the time it hit the US, it had shifted into a celebration of harvest, instead of a protection ceremony. People dressed up, sang, danced, told stories about the dead, and told each other’s fortunes. There was also a good amount of mischief and pranking that was involved with the celebrations. After half a century, these traditions caught on across the country. Eventually, a movement arose to remove the religious and scary ties from Halloween and make the celebration more about community. In the times of the Great Depression, people pooled money to still celebrate the fall festival. Each house would do a different part of the event. One house may give out costumes, another candy, another have a small haunted house set up. This is how trick-or-treating really caught on in the sense that you would go door to door collecting things to celebrate. When the economy got better, people would hand out candy to the kids coming by.

Halloween in current times consists of parties and trick-or-treating. The parties are for people of all ages, and the scare factor usually increases with age. People hold contests to see who has the best costume, or the scariest dessert. As well as, horror movie festivals happen around that time of year.

Every year at Tempe Trophy, we celebrate by giving trophies to people we believe have the best costume on when they come in the shop. Or we each take some trophies home to give out to unsuspecting trick-or-treaters. Nothing feels better than seeing a kid get excited over the costume that they made or picked out. 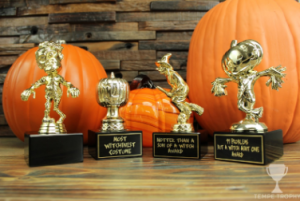