Our Fantasy Beast Trophy features a silver and bronze beast-of-a-champion rising victorious atop a mountain of rubble while he carries his medallion of victory. Mounted on an impressive perpetual base that can fit up to 18 names, this trophy is perfect for any fantasy football league wishing to reign in their beastly victory!

This silver and bronze resin trophy is perfect for the dominating beast-of-a-champion of your fantasy league. The hulky victor stands triumphantly on a pile of rubble, toting a football and raging with fierce primal victory. The stately base has room for 18 individual plates, 6 on each side. The Primal Victory Fantasy Football Trophy will last as your league builds its dynasty, adding a league champion name plate year after year. There is even an area atop the rock pile with a flat surface, where the reigning champion’s plate may be attached for optimal display throughout the season.

We offer a variety of sports trophies for 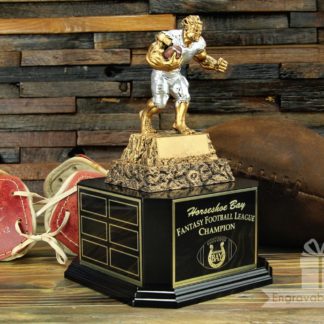