The Moon Monument Award aims high with its tall engravable acrylic sides. Customize its sleek face with your logo in full color or text. Honor your employee like a sun god at your next corporate event with this grand obelisk item. Available in two sizes.

Honor excellence to a coworker, teammate, or whomever you deem worthy of the Moon Monument Award. Standing 8.125 inches tall, the translucent obelisk with blue accents grants professional distinction. True obelisks have been distinguished as mighty structures and had great significance to people of old. Ancient Egyptians built obelisks in pairs at the front of temples to symbolize the sun god, Ra. The tallest obelisk is the Washington Monument built in the same shape as Egyptian obelisks. The building embodies the awe, respect, and gratitude that the United States felt for founding father, President George Washington. The Moon Monument is sure to capture the timeless symbolism of this magnificent structure. Acknowledge your co-worker, teammate, doctor, or professor like an ancient god or founding father with the Moon Monument Award!

Be the first to review “Moon Monument Award” Cancel reply 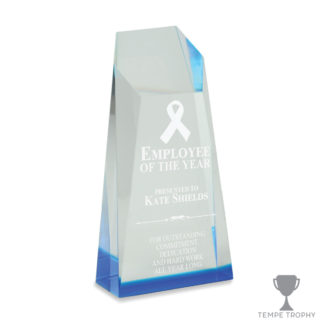